One of the primary benefits of the Water Flosser is that the pulsating action creates a compression/decompression phase …
Feb 1st, 2012 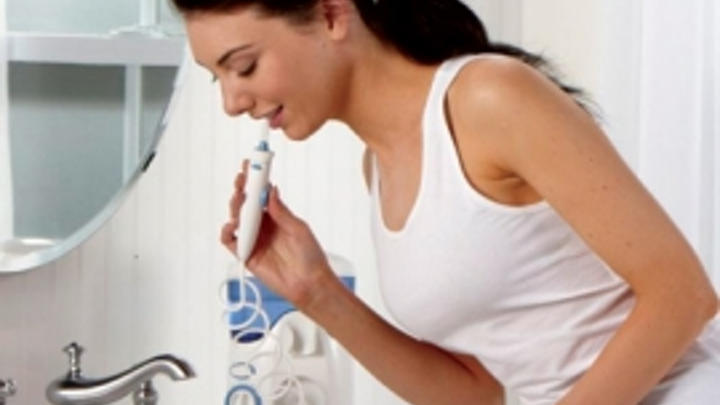 10. It reduces the periodontal infection.

One of the primary benefits of the Water Flosser is that the pulsating action creates a compression/decompression phase that expels subgingival bacteria from the pocket.1 Teeth with no instrumentation for six months or more that were treated with the Water Flosser had reductions in bacteria up to 6 mm.2When the Water Flosser was compared to both toothbrushing and mouth rinsing with 0.12% chlorhexidine (CHX), only water flossing reduced subgingival bacteria.3 A paper by the American Academy of Periodontology notes that one of the greatest advantages of water flossing is that it “permits patients to participate in maintaining the bacterial reduction that was attained during root planing.”4

9. It reduces the inflammation.

8. It helps people with diabetes.

7. It is safe and gentle around implants.

Maintenance of implants is critical to their long-term survival. A three-month study that compared water flossing with 0.06% CHX delivered with the Pik Pocket™ Tip to rinsing with 0.12% CHX found that those who used the Water Flosser had superior reductions in plaque (29% vs. 9%), bleeding (62% vs. 33%), and gingivitis (45% vs. 10%) over rinsing.9

6. There is nothing better for cleaning around orthodontic appliances.

Keeping orthodontic appliances clean can be tedious and challenging. Water flossing makes it easier. Adolescents age 11 through 17 who used a Water Flosser with the Orthodontic Tip every day for four weeks had three times the reduction in plaque vs. those who used a manual brush and floss and five times the reduction than those who only brushed. The Water Flosser group reduced bleeding by 84.5% from baseline, which was 26% better than brushing and flossing and 53% better than toothbrushing alone.10

5. It gets deeper into the pocket than string floss.

A study at the University of Southern California Center for Biofilms found that a three-second application of water flossing with the Classic Jet Tip at medium pressure removed 99.9% of plaque biofilm from the treated area. The teeth utilized for this were colonized by a luxuriant biofilm several micrometers thick. The investigators concluded that the hydraulic forces produced by a Water Flosser with 1,200 pulsations per minute can remove biofilm. The study evaluated the biofilm via scanning electron microscopy. They noted that this method provides a high level of confidence in the direct demonstration of biofilm removal.13 Findings from studies conducted during the past decade that evaluated plaque removal with a traditional whole mouth plaque index have also demonstrated better plaque removal from using a Water Flosser.7,14

Using the Water Flosser is easier than string flossing because it requires less manual dexterity. It takes about a minute to cleanse the entire mouth. Beyond the initial investment, all you need is water, although the Water Flosser can accommodate most mouth rinses. It is appropriate for people of almost any age; even children as young as 6 with supervision.

2. It is a clinically proven effective alternative to string floss

The Water Flosser has been evaluated more than 50 times since its introduction in 1962. Clinical findings for reducing bleeding and gingivitis are supported by positive outcomes from more than 20 clinical trials, many of six months duration.4,5 An independent, systematic review had a similar finding.5 The use of the Water Flosser as an effective alternative to string floss is a new concept that has been consistently demonstrated in three separate studies.10,15 The American Academy of Periodontology notes in its review that the greatest benefit from water flossing “is seen in patients who perform inadequate interproximal cleansing.”4 RDH

Carol Jahn, RDH, MS, has been a dental hygienist for 30 years and is the Senior Professional Relations Manager for Water Pik, Inc.

What Our Patients Are Saying

Font Resize
Contrast
Accessibility by WAH
Call Us Text Us